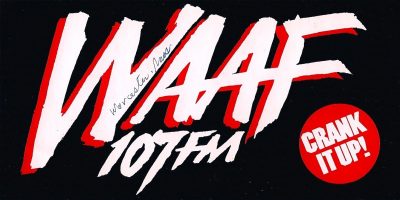 I’m not just the curator and founder of this website, I’m also a long time radio guy whose interest in radio coincided with his love of Rock music. Sure, in my early teens, I grew up with the Top 40 powerhouse AM stations on skip, but also, starting around 1979/1980, I turned into a headbanging teen, and the ONE radio station that turned me into that animal my parents grew to hate was WAAF.

WAAF on 107.3 really began in 1970. There is a history of a signal on that frequency prior to 1970 but it’s only important for the history of FM broadcasting, as this was Edwin Armstrong’s experimental FM station in the 1940s. Whatever format the officially licensed station had prior to 1970, few people remember. But it was in that golden year of FM broadcasting that this radio station really made waves.

I’m emotionally attached to a thing that I’ve not been around to hear for many years and which no longer exists. – Steve West

In 1980 I was a high school sophomore at a school in Orange, Massachusetts. Mahar Regional High. Not a famous school by any means. I learned your basic high shchool things. Like how to sneak a joint in the bathroom and not get caught (I’m pretty sure the statute of limitations applies here). How not to egg the bully’s car without escaping punishment and how to pick up girls – the latter I had more trouble than others. It’s also the year I really got into hard rock. It seemed that lots of guys brought big boomboxes to school that year. One of the first that you could get those big portable stereo systems. Even came with a shoulder strap!

Listen to the end of WAAF Now!  All parts are listed in the playlist right below the player

WAAF was everywhere. The kids who were old enough to get cars had WAAF bumper stickers. We all seemed to have WAAF tee shirts. The station was on all over town. I could even hear a neighbor playing it from my backyard. If you were cool, in the years 1980-1982, you were listening to WAAF! CRANK IT UP!

Orange was a town at least 45 miles from Worcester, and the back roads leading there made the drive over an hour. Yet, as close as Worcester is from downtown Boston, the Boston stations only came in on the side of Orange that I lived in. Clear line of sight to the east. In neighboring Athol – a few miles to the east, nope. Nothing from Boston, except WBZ on the AM dial. They picked up the Hartford and Springfield stations, and Albany NY as the town was situated at the foot of a big hill just to the east. WAAF, despite it being to the east with all those hills in the way came in stronger than any other station. And it rocked HARDER than any station any of us could pick up!

The jocks we all remembered from that era. Jeremy Savage, known then as “The Master Blaster”. Harvey Wharfield. Jeff Berlin, he was “the Baby Blaster” (side note, Berlin is one of the top imaging voices in the country and has been for decades!), Jessica Savitch. Zip Zipfel in the morning. There are a litany of others whom I rembember the voices but the names escape me. These names are really important because, on an Album Oriented Rock station like WAAF, where the MUSIC is much more important than anything, those personalities were just that. They were people who were able to relate to us in a way nobody else really could. So, my hat is off to the jocks, all of them, even from the years after I (and many of my classmates) all moved away for whatever reason. From the Hillman Morning show to whatever they had at the end. The “Crank It Up” era to the “Everything That Rocks” era, we salute what was, arguably, the greatest AOR and Active Rock station in America. As we say in the Navy, Bravo Zulu (Great Job!).

The transmitter was moved to Westboro, just outside of Boston several years ago. With that move, the monster signal WAAF had from it’s former location in Paxton (just outside of Worcester) left greater New England as well. It might be suggested that WAAF died with that ill fated move to Boston proper, but I’ll leave that for another discussion.

WAAF was the last of its kind in the Boston area. Our hope here at Airchexx is, these aircheck files will provide some great memories. It is from the final day of WAAF but presented as a parting look at what was the LEGENDARY 107.3 WAAF!

Airchexx on this page all courtesy of Contributor Ryan Sikes! Thanks!