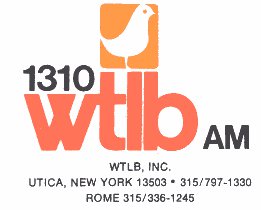 Up now is a wonderfully restored 9 minutes of little 1310 WLTB. Upstate New York, it seems, was a hotbed of radio activity. Good sounding stations, too, as you’ll hear in this recording of what might sound, to one’s untrained ears, a little bit like the George Michael show on WABC. Fooled ya! We don’t know Mr. Reed’s real name but we sure like “The Reed Thing”! Includes an (almost) complete newscast.

WTLB was a little signal station given to utica ny… Thomas L. Brown had nothing to loose in 1959… went to rock n roll to survive. The kids loved it, then when the small station was out billing the the bigger signals, WRUN went top 40. WTLB got crushed. In the ratings, signal wins…

And a bit more…

1974 is when WRUN went top 40, before that WTLB was the only game in town. WNDR in syracuse day pattern hit Utica at 1260 they were right next to WTLB at 1310. WNDR was top 40 as well. Uticans would surf back and forth between the two stations day time. At night WNDR changed pattern and (the signal) missed Utica. WTLB went 500 watts directional at night awful pattern that covered just the city and not much else… when WRUN crushed WTLB at night is when they started simulcasting on 107.3 FM. the FM signal would eventually become WRCK (rock 107) the station I was on for most of the 80s. I was also told that in the 60s and early 70s because of WTLBs night pattern WKBW and WABC had a following in the area.

Thanks! Written better than we could here at Airchexx Studios!

CREDITS
Airchexx.com gratefully thanks Contributor Steve Bleecker for donating this high-quality aircheck to the archives. Mr. Bleecker in turn would like to thank Andy Kitchen for providing him with tape decks, reel to reel machines, etc., in order that he could master the tapes he sent in to us. And, finally, Steve Bleecker and Airchexx wish to thank Mr. Henry Frick, whose efforts in recording this aircheck and many others like it are ultimately the reason this recording is in our archive to begin with. Or, to put it in Contributor Steve Bleecker’s own words,