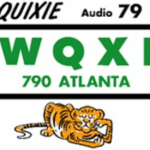 We got a brand new secret word for ya…

Over the years, we’ve posted many WQXI airchecks and most feature Gary McKee or someone else and mainly all of them are from the 1970s. This one takes us back to the year that the Beatles broke upon the music scene. You’ll hear some beatles played and mentioned in the banter. Tom was working with his brother Paul – true story. They called themselves the “Tiger Twins” and had the late night/overnight show.

We’ll refrain from further comments and defer to our visitors to fill in the blanks.