From the generocity of Contributor Karl Philips, here’s Tony Taylor (WQXI Atlanta) on the old WOR-FM.

Lots of Bill Drake and the format that was slightly modified (well, the jingles were) to reflect the New York “Big Town Sound”. Still, it’s tempting to hear ’93 KHJ’ in your head when these jingles play! Remember this was Drake’s answer to ABC’s “All Americans” on 77 WABC. And while this sounds fantastic, remember that this is New York and nobody, not even Bill Drake, was going to beat WABC… although RKO didn’t know that then and they sure tried!

WOR-FM had two eras as an independent FM station: First, as one of New York City’s first Progressive Rock stations, then a Bill Drake – consulted Top 40 station. This is from the latter era. Then, RKO flipped WOR-FM to WXLO. “99X” had it’s own, high energy Top 40 era, and for about 6 years in the 1970s was king of New York’s FM airwaves. 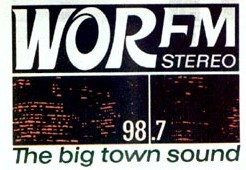