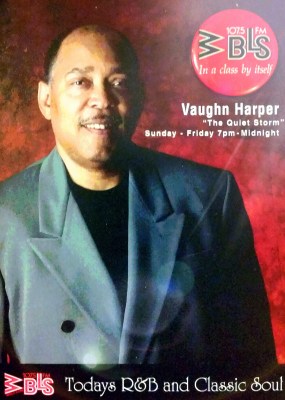 Nicknamed “The Velvet Voice,” Vaughn Harper was a major pioneer of the smooth and soulful “Quiet Storm” R&B/blues/jazz format at 107.5 WBLS that became popular at Urban stations across America in the early 1980s. Before radio, basketball was Harper’s first love. He was a fifth-round draft pick for the Detroit Pistons in 1968, but his basketball career never took off. Later recruited, trained and mentored by legendary WBLS radio personality/programmer Frankie Crocker, Harper joined the station in 1976. Although he suffered a stroke in 1993, Vaughn recovered and returned to late nights on WBLS. He also lent his voice to tons of commercials, the Grand Theft Auto IV video game, and the Apollo Theater as master of ceremonies for “Amateur Night” talent contests. Harper retired from WBLS in 2008 after more than three decades on the air. I recorded this aircheck of Vaughn, on a Halloween trip to New York in 1983. -Ellis