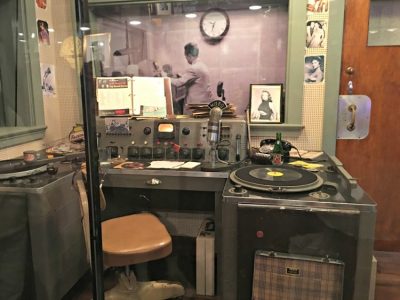 ..I have been moonlighting for the police department, now don’t you go tellin’ anyone...

Somewhat at a loss for words on this one.  The featured photo is from the hall of fame exhibit – Dewey Phillips WHBQ studio from sometime back in the 1950s.  That would be back when the station was located in the Hotel Chisca.

This aircheck goes by so fast it’s hard to keep up. But that’s what happens when I have to scope the music out.  Here’s one of my favorite WHBQ jocks.  Walt Jackson is a great jock!  What this recording exudes is pure FUN!   Think about it.  In 1976, the listening was probably split 50/50 AM/FM.  And at this point in time, WHBQ held the top ratings spot.  It wasn’t to last as FM rose to prominence soon after this but think of the FUN you could have, lying on a beach somewhere in the Mid-South listening to this.