Advertisement
Follow us on Social Media
twitterfacebookyoutube
This falls under the category of geeky sports fan. In 1988, I was a board op for P&S Broadcasting’s 700 WPNS. The call letters – I’ll get to that story in a moment…

Because we were a member of Campbell Sports Network so that we had broadcasting rights to air the Boston Red Sox, the station received complimentary tickets to Media Day, held each Spring at Fenway Park. The tickets usually were for the station owner (Dick Partridge), but he gave them to me, as he wasn’t particularly interested in going – plus, I was engineering the games locally.

Now, as a lifetime Red Sox fan, this was a great opportunity to get inside the bowels of Fenway. But, to be honest, I barely remember it now. Seems like so long ago. But I ran across this tape, which I THOUGHT contained a recording of the old “Satellite Music Network’s” Adult Contemporary format.

Instead, it was a recording of the presentation at Media Day. The Emcee for the event was former, legendary Red Sox play-by-play announcer Ken Coleman! 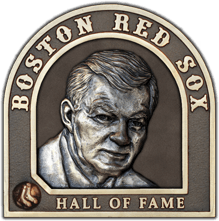 So, what was it like to be a young broadcaster sitting in the audience at Media Day at Fenway, watching Ken Coleman interview some Red Sox players? Listen to this recording that I made, supposedly for the next day’s morning news – I don’t remember it ever making it to air, but the recording remains to remind me that I was there.