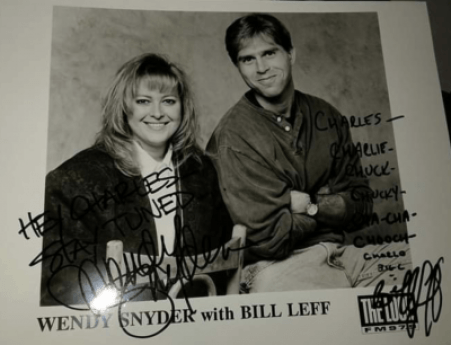 The Wendy & Bill Show, has become kind of an institution in Chicago. Wendy had worked on air at The Loop on & off since 1986. Bill is a Chicago-born actor, writer, comic, studied improvisation at Chicago’s Second City Theatre.  He performed there and traveled with the improv group Joint Void, then made the switch to stand-up comedy, before moving into radio. Wendy Snyder and Bill Leff were first paired as evening hosts on WLUP FM 97.9 in 1994. Two years later they moved to mornings on WKQX FM 101.1. At Q101, they were just gaining traction in the ratings when they were dumped for Mancow Muller in 1998. The two went their separate ways with their radio careers, but loyal “Wendy & Bill” fans wanted a reunion. Fifteen years after their Chicago radio partnership abruptly ended, Wendy Snyder and Bill Leff are teaming up again. It took the overhaul of WGN radio, under new president and general manager Jimmy deCastro (their former boss at the Loop) to bring them back together. In 2013, Bill, who was doing overnight on WGN was brought to middays, & Wendy, who was doing traffic reports on WLS, resigned from her gig to rejoin Bill. As of October 2019, the duo are still together, hosting middays on WGN. This aircheck features Wendy & Bill in their final few months at The Loop in 1996.