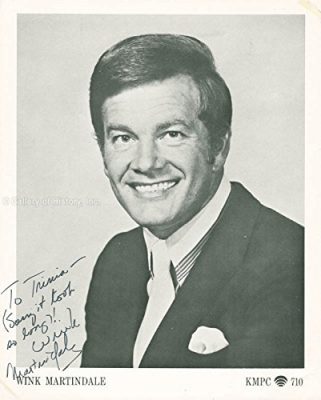 Chances are you remember Wink Martindale from TV gams shows. He hosted 21 different game shows, including “Trivial Pursuit”, “Can You Top This”, “High Rollers”, “Debt”, “Gambit”, and the long-running “Tic-Tac-Dough”. But if you grew up in Southern California, you probably know Wink had a long radio career as well. Wink spent much of the 1950s on Memphis’ number one station WHBQ where he started on air at 19 years old. Wink soon became one the most popular radio and television personalities in the city. In 1959 Wink headed west to Los Angeles where he was featured on air at 93 KHJ, KRLA, 98KFWB and KGIL. His radio dream was fully realized in 1971 when he began a 12 year run as the midday personality on Gene Autry’s flagship “Station of the Stars”, 710 KMPC. This short aircheck features Wink, being as friendly as ever, on KMPC in 1976.