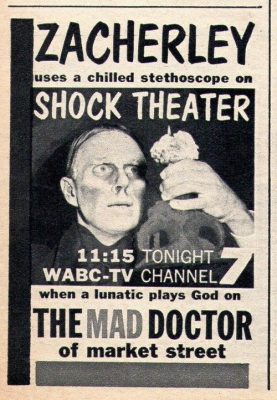 In 1958, John Zacherle arrived in New York city, and launched his scary alter-ego, Zacherly on WABC-TV. Dick Clark nick-named him “The Cool Ghoul.”He became a sensation in New York by hosting pre-1948 Universal horror films, on WABC’s Shock Theater. With the star’s popularity growing, the show soon was rechristened Zacherley at Large. He switched his horror-fest to WOR in 1960, and then he moved to WPIX-TV in 1963, hosting cartoons and Three Stooges shorts during the day and the legendary Chiller Theatre movie series on Saturday nights. After leaving Chiller in 1965, Zacherle went on a long career as radio disc jockey in the New York City market with stints on WNEW, WPLJ, & WXRK. In the 1980s, WCBS-FM invited Zach to host a Halloween special for several years. This aircheck features Zacherle’s first Halloween special from 1984.

John Zacherle passed away October 27 at the age of 98.