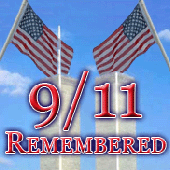 …This just in, a plane has crashed into the World Trade Center in New York…

Webmaster’s note: It’s now 15 long years since the attacks and it’s tempting to back off and remove this tribute. Times are changing. Young adults of voting age who were toddlers when the attacks happened are here who have no idea what happened to those of US who watched this, live. Young people don’t understand that we were at our jobs, our schools and our homes. And we literally stopped in our tracks when the news first came in of the first plane hit.

One can’t blame them for not understanding. Their world is much different than ours was. We’ve been at perpetual war since many young people, in High School these days, were born. Not to editorialize, but haven’t we made war long enough? That is a question for the next President to answer.

It’s precisely for that reason that this tribute remains online. My production skills were a bit more crude than they are today, and perhaps for future years, I shall endeavor to produce something a bit softer and more polished. In the meantime, here are the original words I wrote so long ago. This website launched only 8 months after the attack and I wanted to pay tribute somehow. So, one more time, I think it’s fitting in this presidential election year, to remind Americans everywhere, what happened on September 11, 2001. I hope you will come away understanding how everyone felt, and I mean EVERYONE…

Original post.
Its difficult to go back and watch the footage. Several 9/11 complete day footage recordings from all the networks are available on YouTube. One can get totally immersed in 9/11 if one wants to. You can also view and read literally hundreds of conspiracy laden videos and articles, if that is what you’re into. One thing is certain. Many of you reading this are likely young people who might be doing research, as its now been long enough that some of you who were in diapers or newborns when this happened are old enough to be doing school projects on it. Either way, I hope you will continue your research and come to the truth about what happened that day.

Why do I keep this up, year after year? I think it’s important that we remember what started the cascade of events that have occurred around the world, which has lead, directly or indirectly to the rise of hate groups like Isis, Isil, IS or whatever they are calling themselves these days. Plus, the high level of entisemitism being witnessed across the middle east and even Europe! Its very important that the world understand that, while the goal is to coexist with other religions, athiests and governments, Nobody in the world is safe when one group is determined to destroy all who do not believe exactly as they do. This matters no matter what the religion. Isis surely does not speak for all of Islam, anymore than Westboro Baptist Church speaks for all Christians, or the Sanhedron speaks for all Jews. They do not. But one group mentioned here carries on the vulgar traditions of the worst of the worst. Nero. Hitler. Stalin. And many others in World history come to mind. We may not be able to put a face on Isis as we could Nazi Germany, but Isis seems to continue where Al-Qaida left off after Osama Bin Ladin. And this time, America created them as part of the unintended consequenses of fighting the ‘war on terror’, in a place we didn’t belong. Webmaster’s personal opinion. Afghanistan was fine. Iraq? There was a reason Saddam Hussein ran the country as he did, he kept the really EVIL and BRUTAL elements at bay. I’ll stop there.

Produced by Steve West in August, 2002 for the one-year anniversary of the Al-Qaida attacks on the United States of America, at the World Trade Center in New York and the Pentagon in Washington DC, this is an Airchexx.com Special Presentation!

Now, listen to the events as heard on radio and a somber tribute to a day which nobody the world over will ever forget! As heard on America’s Trucking Network (formerly the Truckin’ Bozo Show) on 700 WLW & XM Satellite Radio, stations of the Information Radio Network (IRNUSA Radio) and hundreds of other stations nationwide.