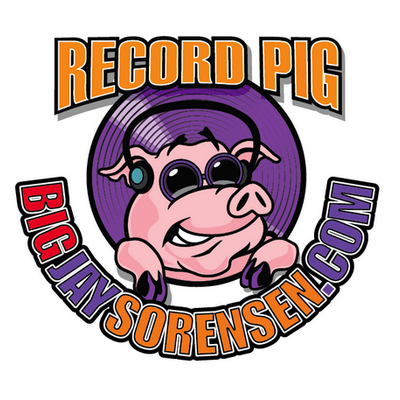 Here’s the first in a large series of Time Machine airchecks from the late 66 (AM) WNBC New York.

WNBC was in its final year of broadcasting. In fact, this recording was made less than a month before the station shut down following RCA’s takeover of NBC. One of the final programming change made at WNBC was the Oldies shows. Collectively called “The Time Machine”, this format was run weekends and overnights, and featured a number of high-profile radio personalities including future WCBS-FM morning man Dan Taylor, former WGAR Cleveland personality and WNBC Assistant PD Jim Collins, Program Director Dale Parsons and Big Jay Sorensen, who would go on to do his “Record Pig” feature on WKXW “New Jersey 101.5” in the 90s.

WNBC had a long and storied history, from its first broadcast in 1922 as W2XY, through the 20s, 30s and 40s as WEAF, and 50s through the 80s as WRCA and WNBC. 66 WNBC was home to some of America’s biggest radio stars and personalities… from Frank Sinatra and Arthur Godfrey, Newsman Lowell Thomas and the entire NBC network to Deejays such as Big Wilson, Imus in the Morning and Wolfman Jack. Howard Stern even graced the airwaves every afternoon for 3 years on WNBC. But towards the end of the 1980s, NBC saw its ratings slowly drop, as was happening nationwide to AM radio stations as a result of FM. WNBC had moved to a more talk approach by 1986, retaining its music programming along with the talk.

WIKIPEDIA’s article on WNBC (AM) includes this description of “The Time Machine“: 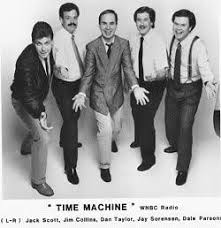 WNBC had a turnover of programming in early 1987. On February 23, the music intensive AC mix with various people was dropped on overnights in favor of Alan Colmes, who would also do a talk intensive show and only six songs per hour. On February 27, 1987, Joey Reynolds’ show was ended and Bill Grundfest temporarily moved into this time slot. On March 9, 1987, Alan Colmes moved to afternoons and continued to play four songs per hour. Joey Reynolds did not run his own board and had Big Jay Sorensen as his producer and board operator. Since Colmes ran his own board, Jay Sorensen moved to the overnight shift and did a music intensive show. This show was now marketed as The Time Machine, playing oldies from 1955 to 1974 (emphasizing 1964–69), complete with old jingles and an echo effect, resulting in a sound similar to WABC’s during its Top 40 heyday.

This aircheck is part of a collection of Time Machine airchecks that were provided by Paul DiMarco, who says he recorded these at his mother’s house in the New York City suburbs, at a place where there was no electronic interference or noise. This set was given to Contributor Bob Gilmore, who digitized the entire collection using a cassette deck with properly aligned play heads and well maintained & cleaned. The result is a nearly noise-free recording with very little tape hiss. DiMarco said that he recorded all of his WNBC airchecks on the highest quality cassettes so that the recordings would always be clean. What you hear is the result of these tapes holding up exceptionally well over the years and digitized at the highest level possible.

Paul DiMarco is a longtime broadcaster, who today is the owner of the online “Totally 70s Radio Network” This is not associated with Totally 70s on SiriusXM Radio. He has recorded hundreds of airchecks over the years, and also holds Ken Gilbert’s aircheck collection along with several other well-known New England jocks.

Click the player below for an audio-only version of this aircheck.