Here’s an aircheck that’s most definitely worth posting here! Broadcasting in AM Stereo, KKBQ, known as “Hot 79Q” is a serious Top 40 contender.

You have to have been there. In 1985, there was, for a time, a resurgence of AM top 40 as a handful of stations nationwide tried to come back as music stations while pushing the then FCC endorsed C-Quam AM Stereo system. It sounded great on the stations that did actually go stereo and many of these stations had fantastic sounding streamlined CHR formats! Unfortunately, the AM stereo experiment was an utter failure, mainly because of the failure of the industry and radio manufacturers to promote or even mass produce receivers capable of receiving AM Stereo. Kinda like today’s HD Radio, aka IBOC (which stands for In Band, On Channel), so this is a familiar situation.

KKBQ – long gone now as a Top 40 station but the scoped ‘check you’ll hear here was as good if not better than it’s FM competition!

This one’s not in stereo, sadly, but the aircheck itself sounds good enough to have come straight out of the studio skimmer! 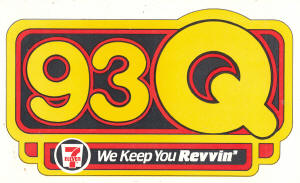