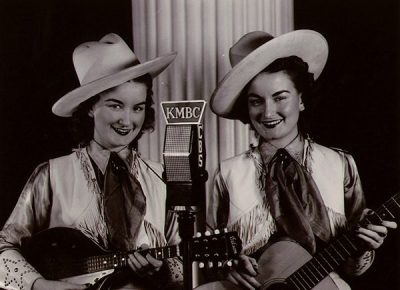 If you’ve watched Ken Burns’ series, Country Music, you may have seen the episode where it featured live Country Western live performance shows going on at many radio stations around the country. Some of these shows, from the 1930s & 40s, include Nashville’s “Grand Ole Opry” on WSM, Chicago’s “National Barn Dance” on WLS, “Louisiana Hayride,” was broadcast over Shreveport’s KWKH, and there were many others. If you were in Kansas City on a Saturday night in that era, you may have listened to or attended KMBC’s Brush Creek Follies. They said that the Follies were the only radio-stage show of its type in the Heart of America. The emcee of the show was Hiram Higsby. He was part of the “Hiram and Henry” duo that were regulars on the WLS National Barn Dance. Hiram did so well as an announcer, and through his work at other stations in his career that he was elected to the Country Music DJ Hall of Fame in 1995. There was a stable of many regulars performers that participated on the show, such at Kit & Kay.(pictured) Comedians were also part of the show. Some of the humor plays to sterotypes, but it’s interesting to hear a slice of live radio from the early 1940s. Calling it the Brush Creek Follies gave it a bit of a local touch for that area, but it wasn’t just a local show, for it was also on coast-to-coast on the Columbia network for a time.