“I Feel like a little screamin’ and yellin’ tonight!”

Jim Channel, aka “Capt. Whammo” is heard here on 95 1/2 WMET. Note the disco music and the WCFL-style jingle package in use at the time which kinda sounds out of place considering the year. They sound good at this point, but I’m at a loss as to why WMET had some of the worst jingles ever heard prior to ’78… low budget, maybe? And, in your humble webmaster’s opinion, the imaging voice is and was horrible, but that’s made up for the fact that the format itself slams, and Whammo is in top form on this aircheck… lively and energetic.

This is a good quality recording, one you’ll enjoy as an alternative to samples of WLS around the same timeframe. 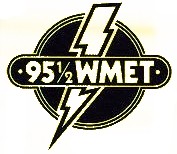