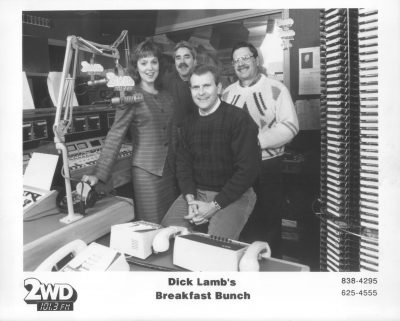 It was 1955 when Dick Lamb broke into radio broadcasting at a station in Baltimore while he was still in school and working part-time as a grocery store bag boy. Little did Lamb know, at the time, he would spend the next 54 years behind a microphone, most of that time on wake up duty.  If you grew up in the Tidewater area in the late 1950s, 60s, & 70s, you would have heard Lamb as a Top 40 jock on 1310 WGH. WGH was THE dominant Top 40 station inthe market for several decades.  Lamb was heard across Hampton Roads hosting “Breakfast Bunch”  on 101.3 2WD WWDE for more than a quarter century, from the late 1970s, through the 1990s. Dick them moved across town to host morning drive at 92.9 The Wave WVBW, where he remained until his partial retirement in 2019. This aircheck features Dick Lamb’s Breakfast Bunch, in it’s final years at 2WD.