1998 was a year of change in the world of Oldies radio. The format, according to its consultants and programmers, was beginning to “age out”. Meaning, the audience for music of the 1960s and early 1970s was reaching the over 55 age group that, while once upon a time, was sought after by advertisers because they have the most ‘disposable income’, by the late 90s were looked at as an age group that was extremely ‘tight’ in their spending habits… and so, just as it is the case today, the “55 +” demographic is not one that advertisers are willing to buy.

What that meant for Big D 103 in Hartford, just like 101.1 CBS-FM New York and 103.3 WODS “Oldies 103” in Boston was, the stations were at a crossroads. Continue to play the same 15-year span of Oldies from 1957 to 1973, or begin to expand the library and modernize their station’s sound. Lets just focus on DRC-FM. At the time of this recording, the music hasn’t changed but the sound had begun to. The jingles were modernized within the previous year and while they still sing “Big D 103”, this would be the last year that they were branded that way. Out of stop sets, the air talent would say “102 point 9” over the intro music of the Big-D 103 Jingle, to emphasize that the station is on 102.9 mHz and NOT at 103, despite the branding. That would soon change. The Top of the Hour Sweeper was very dramatic and to the point. “Our dial position: 102.9. Our Call Letters are WDRC-FM.”

Sometime soon after the holidays, DRC-FM would move to a modernized “Classic Hits” format with an emphasis on music from the mid-70s through the mid-80s. As frequently happens, part of the audience was mortified and swore they’d never listen again. Others welcomed the change.

Radio stations face a similar problem today. Classic Hits, as a format must keep up with ever-changing tastes in music, and much of, if not most of the music of the 1980s and early 90s sounds dated. For one thing, modern music – both CHR and AC formats, have a very plastic sound, produced with computer toys rather than (in many cases) real instruments, rock music beyond 20 years old seems stale and odd to young people (generally under 30) and they are hesitant to sample the formats. Where that leaves stations is questionable. Ratings are still good, for the most part, although this is very market-specific. Boston, for example, is a mecca for modern CHR and Urban music. It’s last Oldies outlet, 103.3 WODS flipped to Top 40 some years ago, and now I think it’s reverted to some sort of Classic Hits hybrid, under different call letters.

About this particular aircheck – Doug Taylor. I never heard of him, although at the time of this recording I was an over the road trucker and only got to New England every 5-6 weeks or so. AFter that, in 2000, I ended up in Memphis, Tennessee where I did radio full time. So, I was somewhat unfamiliar with the DRC-FM air staff during this time period. He is a capable jock, as is the guy who comes in after him. One thing you’ll notice, this is very much FORMAT radio. The weather ALWAYS gets read AFTER the commercial break before the jingle and first song. A live promo is always read going into the commercial break. DJ talk breaks are somewhat generic except for when there’s some news about a particular artist that’s playing (Today, jox need to do their research when tracking – there’s no excuse to EVER just ‘announce’ “that was, this is”, without having some kind of current information about the artist they are playing! There’s your free advice, I’ll waive the consultants fee.).

It’s obvious to my ear, having done over the air radio consistently from 1980-1984, 1988-90 and 1996-2013 that this is a time of change with regard to the studio equipment as well. It sounds to me as if DRC-FM was playing commericals from hard drive, perhaps using Maestro, with the PC players wired into board faders, and the music most likely is on CD carts (those Denon CD Cart machines ROCKED!), which is why the music is so crisp and clean in the air chain! Of course, you may have a different opinion and I invite your comments (below)! 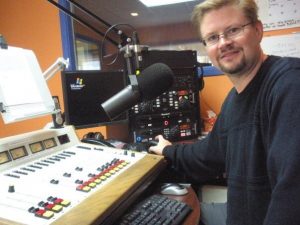