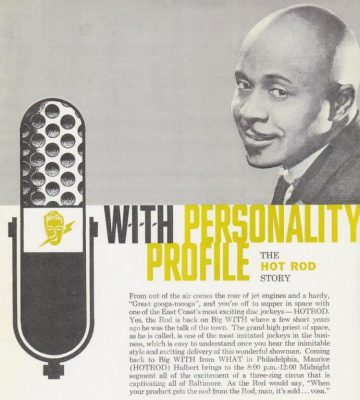 It seems that over the years, so many of the pioneers of early R&B radio have been forgotten about. We may know the names Jocko, & Rosco, but there were so many others unique personalities of the 50s & 60s. One of those jive-talking pioneers was Maurice “Hot Rod” Hulbert. In 1949 he began his radio career at WDIA-AM, the big R&B radio station in Memphis. It was there he began calling himself “Commander Hot Rod” and talking jive on the radio. In 1951 he became the only black announcer on WITH-AM in  Baltimore. Hulbert introduced many terms and phrases to the city, such as “mommyo” and “daddyo,” “good googa mooga,” which meant awesome, and his signature word “vosa,” an acronym that meant the voice of sound advice. He also spent a few years on air at 1340 WHAT in Philadelphia. in 1961, Hot Rod worked simultaneously at three radio stations…in three different cities. He worked at WHAT in Philadelphia, WITH in Baltimore and WWRL in New York. Hot Rod returned to Baltimore, and from 1963 to 1984 bounced  between WITH, WWIN and WEBB. From 1984 until he retired in 1991, he was general manager at the gospel station WBGR. Hulbert passed away in 1996 at age 80, & became the only Baltimore DJ to be enshrined in the National Rock n’ Roll Hall of Fame in Cleveland. This aircheck features Hod Rod on air at Philly’s WHAT in 1954.