Here’s another in our series of WNBC “Time Machine” airchecks. Jack Scott was another of the Weekend Time Machine jocks, one who stayed nearly till the end of WNBC’s run as a radio station. The Time Machine was all 1960s, and given that the ’60s were only 20 years ago in 1988, this was the ‘money demo’. We’ve often commented that WNBC did a better job with the WABC ’60s format than ABC did, and here’s another recording that proves our point. Everything in this format was streamlined, yet personality based. And these jocks didn’t disappoint!

The Time Machine format dovetailed nicely into the rest of WNBC’s potpourri of programming. WNBC had something for everybody – from Rock to Talk, Imus in the Morning when Mr. Imus was still a Rock Jock to the mid-day Oldies show that replaced Soupy Sales, to the variety talk that was Alan Colmes’ afternoon show… and of course, SportsNite every evening. The Time Machine would crank up every weekday morning at Midnight, and then all weekend long. Still, by April of 1988, most everyone at the station knew something was up. That ‘something’ was that WNBC would be stamped out of existence forever in just six months.

Its been over 23 years now since this aircheck was recorded, but it sounds just as fresh today as it did then. Did you listen to WNBC at the end of it’s reign? We’d love to hear from you. Simply post your comments in the section below to get the conversation started. 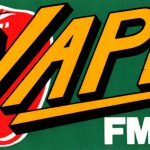