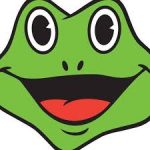 Perhaps one of the better known ‘themed’ radio formats around the U.S. is the ‘Froggy’ brand of Country music stations. Animal names seem to dominate Country stations, some of the better known brands being “The Wolf” – KPLX Dallas, “Cat Country” (there’s a couple we know about, Cat Country 98.1 WCTK Providence, RI and Cat Country 98.7 Jacksonville FL…), but perhaps due to the uniqueness of a ‘FROG’ – how memorable!… well, more than a few stations have taken up the Froggy name.

Pittsburgh has one. Jackson, TN has not only ‘Froggy’, but the old WOGY call letters used in Memphis until January 2001. There’s one in Scranton PA, and a couple elsewhere in the country. But for many years, from 1993-2000, the Froggy name, likeness and WOGY call letters resided at 94.1 in Memphis, Tennessee, on a station owned by Sinclair Radio Group, Inc.

Someone once told me that Memphis’ Froggy was the first. I can’t verify that at this point, but it does seem that many of the others came into being after the success of WOGY.

We join WOGY here, in the last year of it’s existence in Memphis. All the jocks had ‘frog’ names – something to do with frogs. The station mascot was a giant green frog (imagine how hot it must have been for the guy wearing the suit – especially on one of those 100-plus degree Memphis Summer days!). I was good friends with the last guy who wore the suit – Tripp, who would go on to do full time on-air radio at the next incarnation of 94.1.

Here’s a 12 minute scope of Froggy 94 Memphis. The commercials have been left in – and you’ll hear LOTS of spots for the Tunica (Mississippi) casinos, located just 12 miles south of Memphis. You’ll have a HOT time listening to this – if you remember the old frog, and the second or third guy to hold the “Jumpin’ Jack Flash” air name, your webmaster Steve West.

One of these days, we’ll present a ‘Where are they Now’ segment, which should prove interesting, at least for those who want to be found.