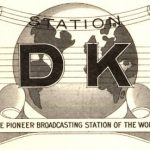 KDKA began it’s life as an experimental station in 1916. In October 1920, Westinghouse petitioned the Department of Commerce for the nation’s first commercial broadcasting license. On November 2, 1920, KDKA signed on the air, and, at 8 p.m., began broadcasting presidential election returns. Radio, as we know it, was born.

After 100 years, KDKA is still one of the top stations in Pittsburgh, even in an era when other AM stations around the country, are having trouble attracting listeners. Through much of it’s history it’s been a well programmed station, from it’s days of running network programming, to it’s day of having jocks playing MOR music, to today as a news & talk station. This aircheck features KDKA’s 100th anniversary celebration. 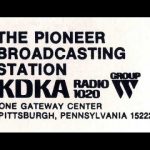