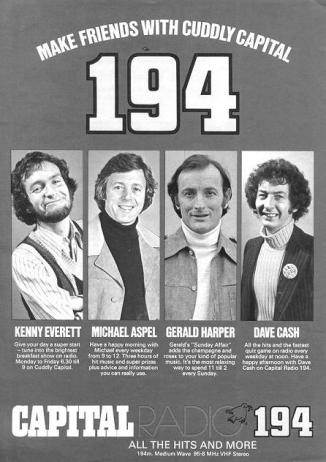 The launch of Capital Radio in London, was a big deal. It was the first of the UK general entertainment stations. Until the 1970s, British radio waves were the exclusive domain of BBC Radio, which usually lagged behind the times, especially when it came to Rock & Roll. This is why Pirate stations outside of the UK became popular with listeners. In 1972, however, the British government opened the country’s airwaves to the first commercial stations. Capital Radio signed on October 16 1973. Capital Radio’s early years were difficult ones. Advertisers were hard to find, audiences were reluctant to tune into what many considered the ‘low brow’ broadcasting and at best amateurish nature of commercial radio. Capital Radio kept plugging away, and eventually became very popular. Originally, Capital was identified by it’s wavelegnth of 539 meters (577kHz). In 1975, Capital moved up the dial to 194 meters (1584kHz).

In this aircheck, you’ll hear the launch of Capital Radio, and part of it’s first hour of broadcasting with David Symonds, who came to Capital from BBC Radio 1.