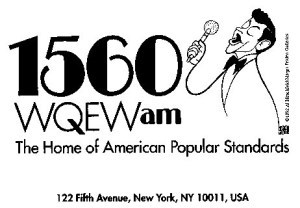 After the demise of Big Band and Standards on the old WNEW AM “Eleven Three Oh”, a group of jocks approached the ownership of Classical WQXR about starting up a Standards format to fill the void left by WNEW. What happened next was a wonderful warm station with glowing personalities and a format that to some degree was even better than what MetroMedia had developed at WNEW. WQXR-AM soon became WQEW and for many years, it WAS the de-facto industry standard by which all ‘Standards’ formats were judged.

Here’s a 41 minute recording of the Les Davis show on WQEW. Listen for a promo for the upcoming Batt Johnson show. You’ll hear some fading, as this was likely recorded in the evening hours some distance from New York City.