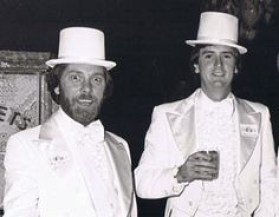 The KWST call letters and “K-West 106” name, first appeard on the in 1969. KWST had a beautiful music format, until January 1, 1975, when the station flipped to Rock, with a sound similar to KLOS. Over time the ratings fell, and in 1981, KWST changed to a short lived Top 40 format. KWST eventually evolved into Adult Contemporary KMGG “Magic 106” about 10 months after the move to Top 40. This aircheck features morning guys, London & Engelman. John London and Ron Engelman, were also heard on KRTH, K-Earth 101, and KMGG, Magic 106. The duo left Los Angeles for Tampa, Florida, and then San Francisco in 1984. It was soon after that when they broke up and went their separate ways. London ended up doing talk shows in San Francisco while Engelman went to work in Boston, back to San Francisco, Dallas, and a handful of other cities.