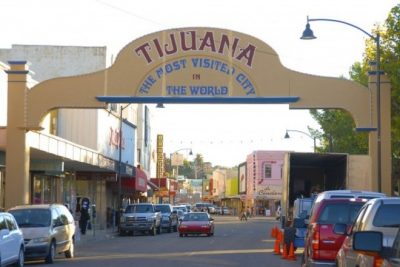 …Don’t you have anything BETTER to do?

A few mouse clicks after talking with Scott Fybush and I can confirm that the XHRM antenna is on one of the towers shown here, on top of Tijuana’s Mt. San Antonio.  I’m really not going to get into the history of this radio station, aside from saying that it was Mexico’s first FM radio station.

Assuming that there isn’t a thriving English speaking audience for it’s programming in Tijuana (and probably wasn’t in the 1990’s either aside from tourists), the 92.5 frequency has served the greater San Diego market from the U.S. side of the border since at least 1979. The Alternative format heard on this tape began in 1993 and ran through part of 1998.

‘Scoped down to just over 21 minutes from 45, it begins with a sweeper, a couple of segues, then the first break by Randy DeWitt. This is the morning show, and even for 1995, there’s a LOT of music and not much in the way of content. The ‘content’ starts after the first stop set at the end of DeWitt’s first break, in the form of Traffic and News with Karen Carter.  You’ll hear a couple of complete commercial breaks, one complete with two television promos for “10 News at 5”, voiced by the great Charlie Van Dyke.  Van Dyke voiced a ton of things for San Diego and Los Angeles over the years, but then, he is one of the very best voiceover talents in the business!

The current station operation is performed by way of STL from the San Diego studios, co-located with KFMB AM & FM.