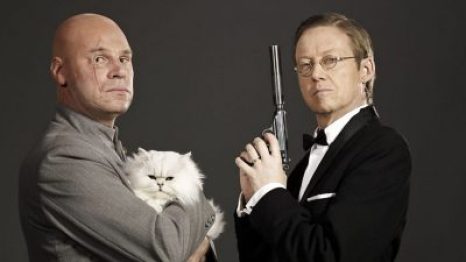 Since 1967, BBC Radio One has been the BBC’s Top 40 offering, for England, Scotland, Wales, & Northern Island. The station started on AM (or Medium Wave as the Brits refer to it) and eventually was broadcast on FM. It broadcasts on different frequencies around the UK. Those signals are all between 97 & 99 FM. Simon Mayo has been a radio host at the BBC since 1981. While Simon was hosting the midday show on BBC Radio 1 in 1994, he decided he wanted to have a movie expert on his show, and BBC found movie critic Mark Kermode. Mark wrote for news papers & magazines around the UK. Simon & Mark had instant chemistry on air, and the two became pretty popular, as they discussed movies, music & pop culture. In 2001, Simon decided he was getting too old for Radio 1’s Top 40 format, so he moved over to the BBC’s news, talk, & sports station, Radio 5. Soon, Mark joined him. As of 2019, they were still on the air together talking movies. This aircheck features Simon & Kermode when they first started working together on BBC Radio 1 FM in 1994.