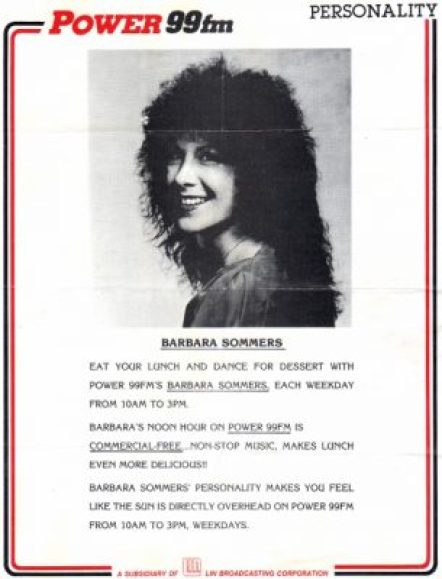 Here is a rare aircheck of WUSL Philadelphia, before it had become Power 99 FM. The station flipped from Country, to Urban in Oct. 1982, with the new name KISS 99FM. WKSZ Media/Philadelphia, which had not yet signed on the air, had planned to use the name KISS 100. WKSZ went to court & was able to get a “Cease & Desist” order, forcing WUSL to stop using the name KISS, because WKSZ could prove they were using it first. WUSL had used the Kiss name for only 2 or 3 weeks, and abuptly stopped using it. With no new name to take it’s place, WUSL just called themselves 99 FM, until early 1983, when They slowly adopted the name Power 99 FM. This aircheck is about a month after they dropped Kiss 99 FM, but had not yet decided on Power 99 FM yet.

This aircheck features Barbara Sommers. At various times, she was an on-air talent at 94 WYSP, a morning show host at WSNI, an on-air talent at WMGK, and a Boss Jock at WFIL. At this point in her career, she was production director for WFIL & WUSL, as well as midday air talent on Power 99FM. She juggles it all very well -Ellis