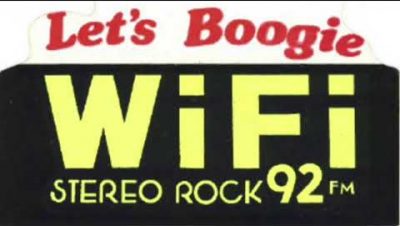 In 1973, Philadelphia’s WIFI 92 instituted a high-energy Top 40 format known as the Boogie Format with the slogan “Let’s Boogie.” It Philly’s first live FM Top 40 station. It performed fairly well for many years. When 98.1 WCAU-FM debuted its Hot Hits format in October 1981, which caused WIFI’s ratings to fall as WCAU-FM quickly grabbed most of the teen audience. In 1982, WIFI made a move to a “New Wave” format, branded as “I-92” and “Rock of the Eighties,” that didn’t really help the ratings. In August 1983, the station was sold to Beasley Broadcast Group, and the new owners instituted a Rhythmic/Contemporary Hit Music format with a call sign change to WXTU (reminiscent of New York City’s WKTU). Right from the start, the station seemed to have identity problems. Over it’s 7 month run, it was know as “92X”,”92XTU”, “92WXTU”,”New 92″, “Musicradio New 92”, “Philly’s XTU”. It was pretty confusing. The music mix was also weird. That format failed to find an audience and was gone in 7 months, and with a new country music format install, which survives to this day.

This aircheck is from WXTU‘s first morning on the air with it’s new calls, with it’s Rhythmic/CHR format. Doug Weldon, the station’s Program Director holds down morning drive. -Ellis