As contributor Ray Bozzanca put it long ago when he sent this, “Hope you can do something with these chopped airchecks”. Well, yes. 1979 was a really long time ago and we haven’t heard from Carol Mason in a long time. Truth be known, I was reminded of Carol’s talents when I interviewed Dale Parsons this past New Year’s Eve (2021).

About 10 years ago, while we were evolving the airchexx.com site in a much earlier incarnation of WordPress (our web platform), we lost the entire database and all the airchecks on the server we used at that time. As I recall, we ended up having to get a new hosting company. Why mention it now? It’s time to return the several hundred airchecks that never made it back online. Every week we get several new airchecks… well, several, to several dozen depending on the person sending us the audio. It’s hard to keep up.

Back to Carol Mason. I LOVE her somewhat smokey voice. It is chopped in places, and because I had to tighten the scope to modern standards, there’s not much of this aircheck to post. Still, it’s worth hearing how WYNY sounded like under the masterful control of Pete Salant. “New York 97” had the right format at the right time in ’79, but there was always competition that came along and chipped away little pieces, until it was no more… Yep. There was 92 KTU that went mainstream CHR in 1980, Z100 in 1983 and by 1985, that was all she wrote. As for Carol Mason, she resigned her position to join Dan Ingram at SuperRadio, which turned out to never happen.

The rest, as they say, is history. 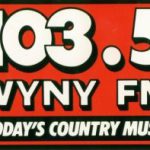