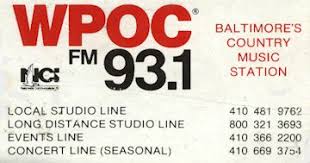 Here’s a clip of WPOC that I recorded while parked at a truck stop on my way to North Carolina with a load of something.  I was a truck driver for a few years after my military service and my professional radio career in Memphis.

In the world of Country Radio, there’s not a lot of difference between one station and another. That is unless they’re in the same market. We recently posted a ‘check of 100.7 WGRX in its Country incarnation, which it was in at the time of this recording. There are subtle differences, the most pronounced being that WPOC is, and always has been, very AC in its approach. The WGRX format was more CHR in its presentation.

WPOC was owned by Nationwide Communications for much of its existence. The parent company was Nationwide Insurance Corporation.  It’s jingles reflected that through the mid-1990s. The jingles sung to the melody of the parent company’s insurance ads “Nationwide is on Your Side”. At the time of this aircheck, jingles were not being used and the station had gone from calling itself FM 93 WPOC, to FM 93.1.  That was most likely due to the change of ownership which happened in 1998.  WPOC was sold to Jacor, and with the mergers and acquisitions.  The station is (at the time of this writing) owned by iHeart Radio.

This aircheck is a telescoped recording of Chris Emory. It’s good to hear, but the audio is only AM quality and it was recorded in mono for some odd reason. Do give this a listen, WPOC has been awarded numerous industry awards over the course of three decades. For that reason alone, it’s worth a quarter-hour of your time.

Here’s a quick reminder that Airchexx exists via the support of our visitors.  Won’t you donate a small amount to help keep this online audio resource on the web for the next generation?  Your kindness is very much appreciated!  Thank you!