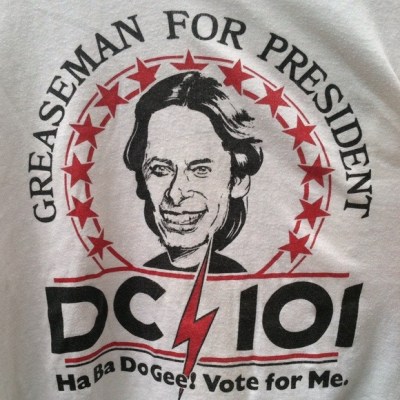 There are three radio personalities, who normally work alone, who have blown me away with what they can do on the radio. All 3 make it look so easy. First is Gene Shepherd, who would tell stories on the radio every night on WOR, and he kept me riveted for a whole hour. Second on my list is Broadway Bill Lee, who can seem to effortlessly rhyme anything, even words that don’t seem to have a rhyme. And finally, Doug Tract, better known as The Greaseman. He is truly a one of a kind radio personality. In an era of 3, 4, & 5 person morning shows, Grease would make radio comedy gold, all by himself. The Greaseman pseudonym originated while he was in college. Grease has said in an interiview, “In those days of top 40, everybody who was on the radio was ‘cookin’; cookin’ with the Temptations, cookin’ Four Tops, that kind of thing. Which meant they were really rockin’. One day I said I was cookin’ with heavy grease. It was my way of saying I was out-cookin’ the other guys. I said it enough times, so one day one of the other deejays referred to me as the Greaseman.” Dougie T was his on air name, but when he became the Greaseman, a different personality appeared. His voice deepened, and he projected the image of a middle-aged tattooed big bellied truck driver, with a swaggering bravado. Over the years, Grease developed many characters, and calls from listeners would often lead to a story of a recurring character from his repertoire, and thanks to Greaseman’s own special language that he invented, & listeners understood, no topic was taboo. This aircheck features Greaseman at the top of his game in 1985, when he ruled morning radio in D.C., on WWDC, DC101.