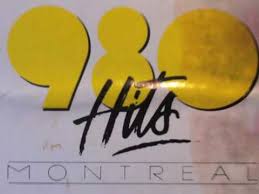 CKGM was a legendary  Top 40 station in Montreal, through the 1970s, into the 80s. It was one of the few bi-lingual stations, with jocks speaking in English & French, and the music in both languages as well. That was until the CRTC (the Canadian equivilant to the FCC) mad them stop, on the request of French language stations, because the govenment had issued them an english license. They continued as an Top 40 station until 1986, when new owners, CHUM Limited, flipped CKGM’s format to gold-based Adult Contemporary. Then, on February 10, 1989, The station returned to a Top 40 format, changing its calls to CHTX in an attempt to distance itself as far as possible from its earlier days as a Top 40 station. CHTX identified itself on-air as Montreal’s 980 Hits. Not many AM stations would attempt Top 40 on AM in 1989, but they gave it a whirl.  The station was pretty tight, and used great sounding jingles & production, but listeners were on FM. The station ran for a few years, only drawing modest numbers. By April 1991, the station had run it’s course, and had flipped once again, this time to Oldies. This aircheck features audio from 980 Hits, right in the middle of it’s CHR run.