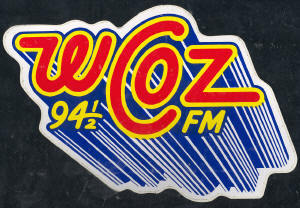 Close your eyes and imagine yourself in Boston. The year is 1978. You start tuning around the radio dial. You start on the AM band, because that’s where your favorite station has been for many years. You stop for a moment at 680. WRKO is still going strong. They call themselves “New England’s Album Station” at this point in time – a slogan that will take a lot of heat by the jocks at WAAF out in suburbia – Worcester. Not that it matters to the folks at WRKO. This is the morning show and you’re listening to Charlie & Harrigan.

Open your eyes. Yes, you were dreaming for a few minutes. This is actually a recording. And, thanks to Matt over at Big Apple Airchecks, you’ve got 45 minutes worth of memories to plow through.

This tape actually begins with Ken Shelton (WBCN), heard here on 94.5 WCOZ. 94 1/2 Rock Radio WCOZ is a pretty laid-back station, having flipped from Beautiful Music (BM) just over two years prior, to become a mainstream Album Rock station. This is before Dave Sebastian’s “Kick Ass Rock & Roll” era, and the sound is quite noticeable. The next 10 minutes are devoted to Tracy Roche on 104.1 WBCN. Boston’s OTHER AOR. The one thing you’ll notice more than anything about this segment is how ‘real’ Tracy Roche is. She has a knack for communicating one on one with the listener. Next, Dave Iseman on FM 94 WCGY. WCGY is called “The Rock Garden”, yet it’s not the same station as a year prior. This station was jockless before the term existed, but at this point, it’s a live assist/pre-taped station. I seem to remember Dave Iseman but don’t remember which station he was on. This has a laid-back approach also, but is not playing standard AOR fare… WCGY during this period aired “American Top 40” every Saturday morning. Listen for a promo for “Record Report with Robert W. Morgan”.


After WCGY, it’s on to a 5 minute segment of the Charlie & Harrigan morning show on 68 WRKO. ‘Nuff said about that. The following segment is 7 or 8 minutes of Jim Grant on 98.5 WROR. Now, this greatly surprised me. I was under the impression prior to listening to this, that WROR was your standard-fare 50s/60s Oldies station. I was taken by surprise by a format that was far more contemporary than Oldies, with jingles that mimicked the AM (WRKO). This was a live sounding station (I’ve heard WROR was taped until 1980)… this is quite an educational moment for those who never heard the “Great 98″…

For the last two segments, we hear Mike Waite on WPJB “JB105” Providence, then Bill Smith on the old WEEI-FM 103 (Now WODS).

This composite is a great history lesson for those who wish to study or just enjoy Boston radio from the late 1970s. Its really an eye opening look at stations, all of which have now changed formats. Just for information, here’s what’s on these frequencies today: