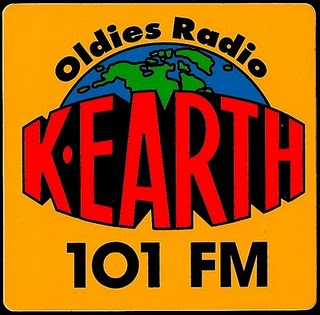 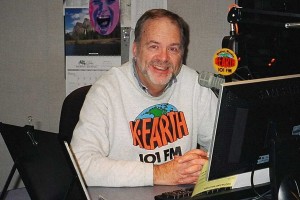 In the Summer of 1981, my brother Mike spent his Summer vacation in Los Angeles with relatives and while there, recorded a few tapes of L.A. radio.  Of the three tapes I had at one time, two managed to survive.

The aircheck starts with Pat Evans’ morning show. Mr. Evans does a warm, personable show, although you won’t hear many of the elements of today’s modern morning shows. You will hear highlights of the previous day’s Angels game (and it sure is nice to hear Jim Fregosi’s name again). This first segment rolls for about 31 minutes, then “Mr. Rock & Roll”, Brian Bierne steps in and begins the K-Earth 101 mid-day show. Listen for Gary Owens doing a “Knudsen” yogurt spot (are they even in business anymore?), a recorded “community events’ announcement (very nicely done!)

KRTH was then owned by RKO Radio, as was sister station 93/KHJ. KHJ, in 1981 was then a Country station, having dumped Top 40 over a year earler. It’s been long speculated what might have or could have happened had the KHJ format moved over to KRTH. Apparently, according to sources in the know, this format was indeed RKO’s attempt at taking KHJ’s fomat to ‘the next level’. This is similar to what happened at RKO’s Boston properties. WRKO was still playing music in ’81, although had toned things down and gone the AC route under the local direction of Charlie Van Dyke. It’s FM was 98.5 WROR. In 1980, WROR dumped its VERY long running automated Oldies format in favor of live, Full Service AC. By 1981, both WROR and it’s L.A. counterpart K-Earth 101 were in a direction that could have taken either or both stations to CHR. Indeed, at WROR, the Summer of1983 was the year they actually tried CHR at least on a limited basis (with no less than THREE CHR’s already in the market), but by September of ’83, WROR was back to AC. In Los Angeles, K-Earth 101 never crossed the line into CHR, although there were times that it got close. By 1985, KRTH was solidly in Oldies territory, where it would remain and eventually achieve huge ratings success.

So it is pure luck that this aircheck is one of only TWO that exist (coincidently recorded by my brother specifically for me upon my begging back in ’81) of K-Earth 101 during this very short era in it’s long, storied history.

Where are they now:

* Pat Evans – KKDJ, 1974; KEZY, 1976; KHJ, 1979; KHTZ, 1979-80; KRTH, 1982-85. Following a five-year stint as pd at KSMG-San Antonio, Pat is now the in-house voiceover and production guy for WOAI/KTKR San Antonio.
– From laradio.com
* Brian Bierne – (b. November 7, 1946) was a radio DJ for KRTH-FM aka K-EARTH 101 in Southern California. He is known as “Mr. Rock N’ Roll”, which is his registered trademark and is considered one of the foremost historians on Rock N’ Roll. Beirne’s Los Angeles career lasted almost three decades, representing the longest continuous stint in FM radio history.

Beirne was the voice of K-EARTH 101 during the RKO days and reached legendary status as a top-rating midday personality in the Los Angeles market for 27 years – a record-setting achievement in FM radio. His radio career has spanned 40 years which included San Francisco, Chicago, Cleveland, and Sacramento among others, and he continues to host and produce Rock and Roll shows around the country. Beirne retired from KRTH-FM on December 15, 2004.

On January 18, 1991, Beirne was honored with a star on the Hollywood Walk of Fame.
– From Wikipedia

Hey there, before you leave…

Do you think you could spare a moment? Airchexx.com survives, literally, on the donations from people just like you. The ads you see take about 3 months to build up enough revenue just to get a small check. If you enjoy these archives, which so many out there do indeed rely upon, could you spare a little bit of cash? All of it goes to the hosting fees and miscellaneous costs of running this website. Thank you in advance.