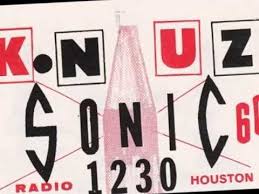 Sometimes we run across an aircheck that’s so good, you wonder where it came from. In this case, 20 minutes and 34 seconds of KNUZ is a real time-trip back to 1961, to an authentic broadcast featuring DJ Paul Williams. The audio is so good, this had to be recorded on a reel and preserved at a place where tape oxide wouldn’t get dry and brittle & fall off. There is a hint of reverb on this signal as well.

The history of this radio station is slightly confusing. Apparently, there was a station at 1230 prior to KNUZ’s 1948 launch with the call letters KTHT. That station moved to 790 so it could transmit with more power. The format here represents the Top 40 format KNUZ had for most of the 1960s. The station competed with 610 KILT, but ultimately could not beat them. KNUZ switched to Country music and remained that through the 1970s. The KNUZ call letters were on 1230 from 1948 – 1997. For more on the station’s history, you can go HERE for Wikipedia’s article about the current station on 1230, KCOH, and HERE to a description of KNUZ on the Houston Radio History blog.

Paul Williams is not only the jock, he is a capable news reader as well. I know nothing about Williams, and this appears to be from the overnight show in the 2:00 hour, which would make sense having the DJ also do news as well, at a time when most everyone is asleep.

View this on our official Airchexx Classic Radio YouTube Channel (below)