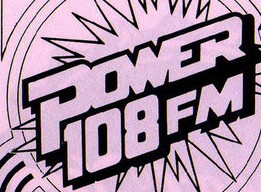 A Program Director’s dream length aircheck coming in at about 3 and a half minutes, WPHR is the CHR station known as “Power 108”!

Because this is short there is really not much we can say about this. Jim Hart is heard first, he says his goodbye and turns the station over to Calvin Hicks before going into a commercial break.

The best part about this is the station imaging. Nice use of echo effects and almost overdone (some might say it IS overdone to the point of distortion), Power 108 is pounded into the heads of young listeners just like the CHR consultants say it should.

While the station sounds Urban leaning, there’s still lots of mainstream Top 40 hits in the mix. Not that we can tell in a three minute scope, but we heard no Rock, but plenty of beats. Cleveland listeners will set the record straight on this station.