The current 1070 KNTH Houston bears no resemblance to the station formerly known as KENR. Going back to 1982, this was a station that boasted full news and sports departments, and an Oldies format that teetered on Standards, as the station played a wide variety of music from Do-Wop 50s oldies to Frank Sinatra.

The morning show was billed as “Radio Magazine” and included comprehensive news reports, full sports reports and lots of elements one would hear on an Adult Contemporary station, such as Horoscopes and Birthdays. Technically, the morning show hosts were Joe Ford and Penny Crohn The news people were Bruce Barker, Chuck Scott and the aforementioned Penny Crohn. John Greardon did sports, and the horoscopes were read by Jeannie Long.

Aside from the technical stuff which you hear in this 7:25 scoped down recording, there’s really not much more we can tell you about this station, aside from the basic call letter history. 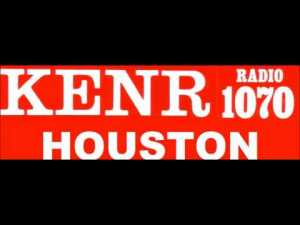 The following is quoted from Wikipedia at the following link: //en.wikipedia.org/wiki/KNTH

During the 1970s, 1070 AM KENR Houston, Texas was a country music radio station. The station first signed on in January 1968 as a 5,000-watt daytimer, owned by Bill Edwards of Saginaw, Mich. In 1972, the station began broadcasting 24 hours a day and increased its power to 10,000 watts daytime and 5,000 watts at night. DJs on “Keener” Country in the early days included Eddie Kilroy, who went on to become a prominent country music record producer in Nashville, and Jacky Ward, who subsequently scored country hits of his own with songs such as “Fools Fall In Love” and “Big Blue Diamond.”

When KENR started broadcasting 24 hours in 1972, Leroy J. Gloger, then-owner of KIKK, was concerned about the fate of his station, so he sold it to Sonderling Broadcasting. In the meantime, KNUZ’s owner, Dave Morris, who felt his station was losing a Top 40 turf war with KILT and was also being hurt by KULF, so he flipped the station’s format to “Country Fresh Kay-News” in 1973. However, according to Houston radio vet Chuck Tiller, KNUZ at its best was a “punch”, meaning that if you didn’t like what KENR or KIKK were playing, you might “punch” your button for KNUZ as a second choice.

By 1973, KENR was a big success, becoming the first major-market country station to be ranked #1 in all demographic groups 12 years old and older. DJ and music director “Dr. Bruce” Nelson (now known as “Dr. Bruce” Nelson Stratton) had a hand in this and, accordingly, was named Gavin Music Director of the Year in 1974. Allegedly, the station helped boost the careers of Mickey Gilley, Freddy Fender, Johnny Lee and Gene Watson. Despite one #68 U.S. country chart hit (“Now I Can Live Again”) in 1968, Gilley was essentially a local Houston-area artist when, in 1974, he cut a single, “She Called Me Baby”, to be distributed in jukeboxes around the adjacent city of Pasadena, Texas. Nelson found the record, flipped it over and played the B-side on the air. The song, “Room Full Of Roses”, became a hit, Playboy Records picked it up and it became the first of sixteen #1 country chart hits for Gilley. Nelson also started, on KENR, the first live broadcast from Gilley’s nightclub, the “Saturday Night Special”, which evolved into the syndicated “Live at Gilley’s” show that was popular during the “Urban Cowboy” craze.

The liner notes of Watson’s 1975 album “Love In the Hot Afternoon” includes the statement, “We at Capitol Records owe a debt of gratitude to radio stations KENR, KIKK and KNUS (sic; this should read KNUZ) in Houston for their part in exposing the talents of Gene Watson …” The album included three country hits, including “You Could Know As Much About A Stranger.”

Other DJs during KENR’s tenure included John Dew (1977), Howard Reynolds (1980), Frank Roberts (1981) and Jim Rose (1981). Additionally, helicopter traffic reporter “Chopper Bill” Waldrop worked there in 1981 as well. Another Jock of note was Sonny Ray Stolz (1977–1981) who was Houston’s first FM Country DJ, having signed on KIKK-FM in September, 1966 and had a 14-point rating share. Sonny became the voice of Big Tex for The State Fair of Texas after statewide announcer competition in 2001. While at KENR, Sonny Ray Stolz produced ‘The Original Home Grown Show’ which featured strictly Texas music and Texas artists, a ground-breaking concept which spawned several imitators across the state. However, KENR was the first to provide this forum.

Circa 1979-80, KENR management brought in a “Yankee” to become program director in the form of one Joe Formicolla. At times he also filled in on-air. And, although his distinct “northern” accent was a handicap for being on-air in Texas country music, Formicolla did bring the concept of dropping interesting trivia into the course of an air shift, requiring all jocks to do likewise. They actually read items from sources such as The National Enquirer, etc. Formicolla left KENR circa 1981 and later was awarded Country Music DJ of the Year by the Country Music Association and recognized during its annual awards TV program from Nashville.

In 1981, KILT changed formats to country from top 40; longtime album-rock sister KILT-FM followed suit. Additionally, nationwide, music on AM was fading at that time. (One exception, albeit an off-topic one, was the success of KKBQ Houston—once known as KULF—for a time starting in mid-1982.)

KENR responded by becoming “Keener Country Gold.” But it was being seriously hurt by KIKK-FM and both versions of KILT.

AM 1070 subsequently went through periodic format changes, occasionally simulcasting sister KRBE (which, by the way, flipped back to top 40 in late 1984) and, at other times, airing such formats as classic rock and hard rock.

In November 1986, Susquehanna Radio purchased KRBE as well as AM 1070, which by then was known for its as classic rock format. The format was dropped in January 1987,[1] and returned to a simulcast of KRBE-FM, which lasted until early 1988, when it began running the Satellite Music Network, hard rock format “Z-Rock” under the KKZR callsign. Susquehanna changed 1070’s call letters back to KRBE on January 1, 1991, and went back to simulcasting the FM when its agreement with SNM ended.

The station briefly took on the KCRR (“Community Recall Radio”) calls when Susquehanna sold time to a religious broadcaster in 1993, but fell through within four months. The KRBE calls and simulcast returned.

In April 1994, the KENR callsign was restored and the station was sold.