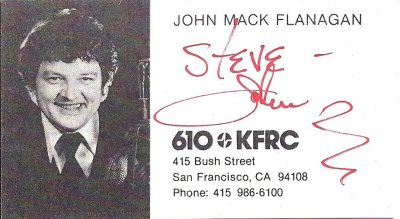 Here are over 15 minutes of pure 1970s KFRC heaven!  If WABC New York is considered the greatest Top 40 station of all time (on the East Coast), then 610 KFRC has to be it for the West.

Actually, west coast Top 40 was significantly different than it’s east coast counterpart, so in this regard, there’s really no comparison – and no equal. KFRC was, in its own way, really THE very best Top 40 in America. There was no echo, but they didn’t need it. The station engineers must have been geniuses – KFRC‘s processing was so good that the music literally lept out of the speakers, but WITH NO DISTORTION!

Probably the best part of the KFRC sound was the jocks and incredible production. When you listen to this aircheck, remember, all this was done manually with no fancy computer toys. All the imaging was done with a reel of tape and a razor blade. These guys were the best in their trade – and it showed as KFRC was rewarded with the consistently highest ratings in San Francisco… a feat accomplished by an AM station running only FIVE THOUSAND WATTS!!!

The condition of the source tape was outstanding.  This required no processing for presentation and arguably sounds just as good here as it did when it came out of the receiver.