Charleston, as with so many markets these days, has had a lot of format and frequency changes since the new millenium took hold. The 96.1 frequency is certainly no exception. At one point, WAVF, known as “96 Wave-FM”, was a very popular Mainstream, then Alternative, Rock station. Their yearly “Battle of the Bands” attracted numerous local artists and countless shows in the Lowcountry.

Back to June, 1988 and this recording of the Wakeup Crew featuring Atom Taler. 96-WAVE was ahead of the technology curve, with listeners phoning in traffic reports on their gigantic mobile phones via the Cellular 1 network. Lots of traffic gets reported, too, around places like the Navy base, Goose Creek, the Old Cooper River Bridge… you get the picture. Music on this tape was all mainstream 70s/80s fare, including some Paul McCartney, Joe Cocker and more. No alternative is found here. 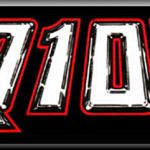